Claudia first recognized Preserve Granbury’s advisors, Dominique and Charles Inge, and thanked them for their support of preservation.

Preserve Granbury’s Preservation Projects of the Year award honors exemplary works in restoration or rehabilitation of historic resources or the preservation of material culture and heritage. Claudia, Diane, and Linda presented the 2012 awards to: 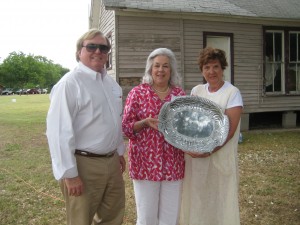 ☛ Scott and Viki Young for their rehabilitation of the Granbury State Bank building, fondly known as the “Red Bank Building.” Built in 1905, the bank building is an important corner anchor on the historic square and

Scott and Viki have revitalized it as a thriving retail space fittingly known as “Red.” 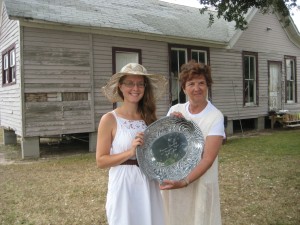 ☛ Shelbie Miller for her rehabilitation of the folk hall-and-parlor or dogtrot house on East Bridge St., fondly known as “Heaven Hill.” 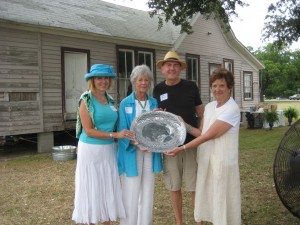 ☛ City of Granbury Parks Board for partnering with Preserve Granbury in a unique public-private endeavor to plan for the preservation and restoration of Lambert Branch Park and the historic buildings located here. The Parks Board led the way in securing funding from the city’s bond funds for a master plan for the park and a preservation plan for its buildings. 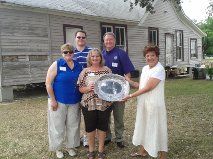 ☛ Tarleton State University for its preservation and stewardship for 16 years of the Dora Lee Langdon Cultural and Educational Center and for donating the center and its beautiful setting and buildings, located on a full city block downtown, to the City of Granbury and the citizens of our community. 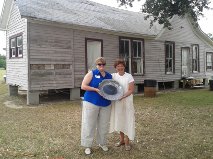 ☛ Janice Horak for creating the thriving cultural haven in our community known as the Langdon Center. Janice brought new life to the historic site and its 19th century buildings, developing an arts magnet that draws artists, musicians, and writers, and allows them to share their talents in a nurturing environment with appreciative students and followers.

☛ The First National Bank of Granbury—this is actually a “Preservationists of the Century” award, recognizing First National’s continuing support of historic preservation, especially of the historic courthouse square and downtown Granbury.
Claudia, along with directors Scott Young and Dee Gormley, presented this award to the bank at the celebration of its 125th anniversary on Friday, June 15 on the courthouse square.