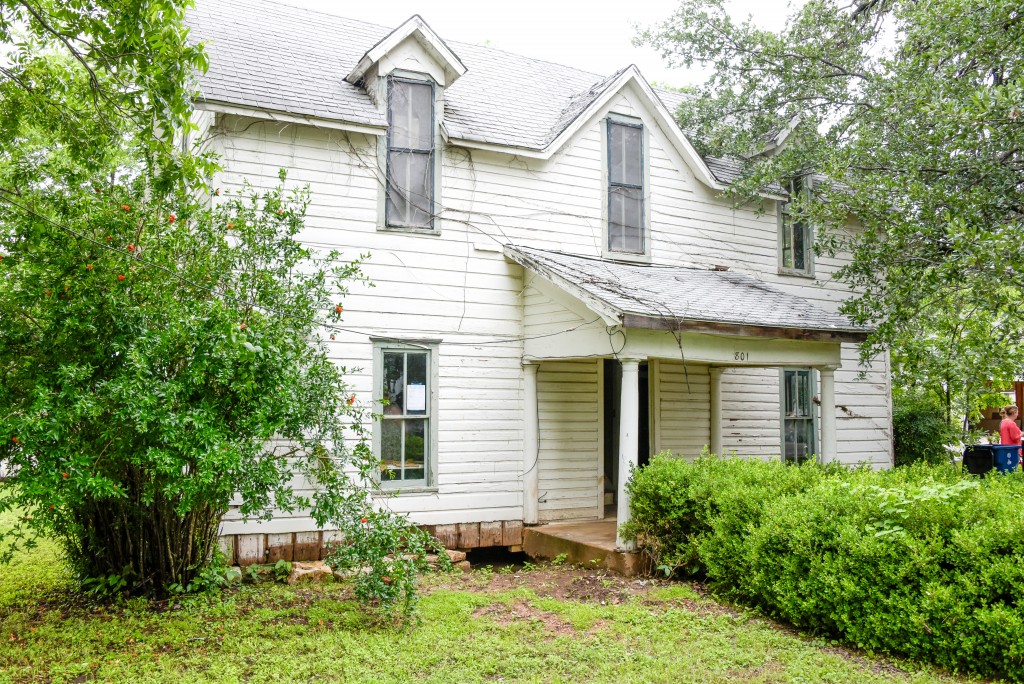 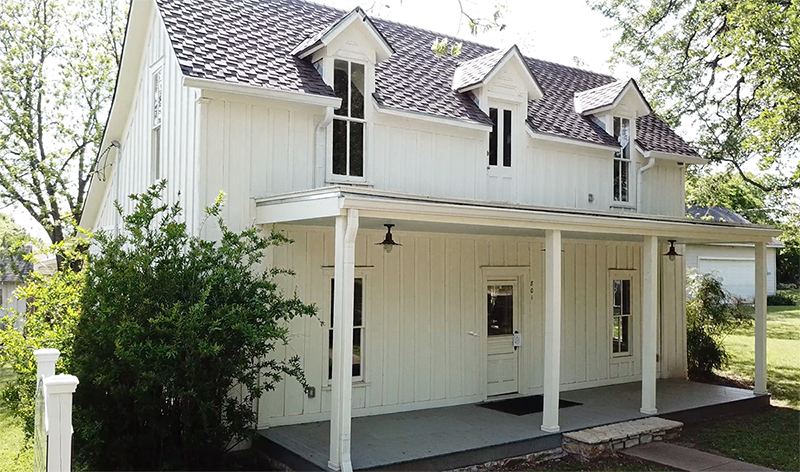 The Preserve Granbury House was built circa 1881, and was designated as a City of Granbury Historic Landmark in 2008 because of its local architectural and historic significance.  Architecturally, the house is one of two known existing historic resources built of lumber planks during Granbury’s early settlement period (late-1850s to late-1870s).  Builders constructed the house with vertical 1″ x 12″ planks with joining battens and no framing.  It still has its original vertical plank wall construction intact, although it was later covered with clapboard.

Located along the Lipan Highway (FM 4) – a major entry to Granbury from the northwest – the house is shaded by a large oak tree that the Texas Forestry Services dates to at least 500 years.  The City designated the tree as a Granbury Historic Landmark in 2002.

The House reflects the influences of two architectural styles popular in the United States during the middle of the 19th century.  The steep central gable on the front of the house flanked by gabled dormers reflects the influence of Gothic Revival styles, while the central portico supported by classical columns and pilasters reflects the influence of Greek Revival architecture.  The house is a “folk I-house” with an elongated two-story narrow form.  It originally had two chimneys, one flanking each side of the house.  There is a central dogtrot – a feature that reflects the heritage of settlers that migrated to North Central Texas from the Upland South after the Civil War – described by cultural geographer Terry Jordan Bychkov as a “cultural icon” (Jordan-Bychkov, 2003, p. 40).

To a lot of people, the old Granbury General Hospital Building is just the Opera House Dorm, another old building.  But when it was constructed, it was an asset to the community, providing local hospitalization and heath care.   It marks a milestone in the development of the community.  When it was constructed in 1946, Granbury only had around 1,300 residents and all of Hood County only around 6,000 people.

The Granbury General Hospital Building is one of four existing post-war buildings exhibiting distinctive characteristics of the Modern Movement that remain in a community that has preserved many more buildings that typify late-19th century and early-20th century revival architectural styles. It is one of two Modern Movement buildings in Granbury designed by a professional architect. The hospital’s location, just one block north of the Hood County Courthouse Square, reflects the continuum of history through evolving architectural styles in Granbury.

This project is just getting underway, and is to plan for the adaptive reuse of the old Granbury General Hospital Building.  We will be working with Architexas, a restoration architectural firm in Dallas, to develop a plan and determine the cost of restoration.  The architect has been through the building and now is developing a scope of work to help us through the process.  Preserve Granbury is on the committee led by Ken Hackett that includes interested citizens and organizations that want to see the building remain and become an asset to the community again.

Preserve Granbury’s Plan to Support the Maintenance of Public Structures 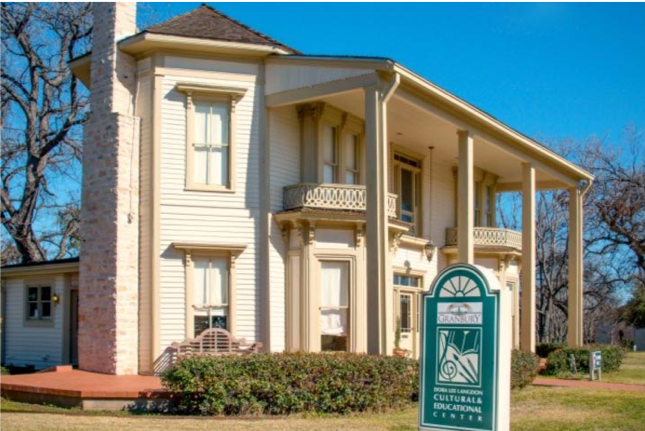 The mission of the Dora Lee Langdon Cultural & Educational Center is to extend the reach of Tarleton State University in cooperation with the City of Granbury by developing and maintaining relationships with a broader constituency, to enhance the public image of the University and City through quality cultural programs and to encourage life-long learning through community education opportunities.

Preserve Granbury has long supported the Langdon Center. It obtained Determination of Eligibility to be listed in the National Register of Historic Places for the A.P. Gordon House in the Langdon Center. This enables the City to seek grants for restoration of the house. Preserve has donated $26,000 toward rehabilitation of Gordon House and other historic buildings at Langdon Center in the past. With a generous donation by the Gordon family for improvements to the interior of the building and a matching donation from Preserve Granbury, the City completed $10,000 worth of interior improvements in early 2019. This included repairing water damage and painting trim work in the entry way. The stained fabric-covered walls were cleaned, and the carpet and drapes were cleaned. It is quite nice! Stop in for a visit. 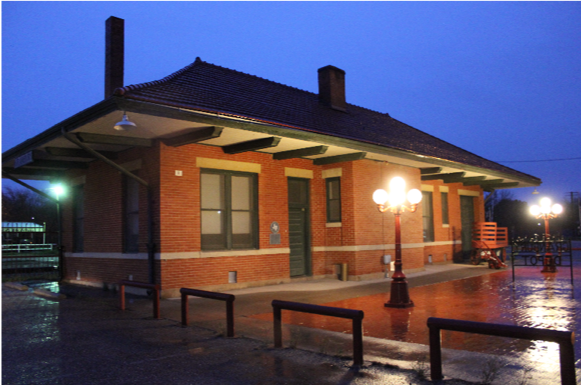 Granbury’s Railroad Depot is a pristine example of Texas Depots. The building has not been modified since its original construction in 1914. The depot has been the hub of the county’s development and has seen substantial changes in Granbury’s cultural and economic growth. The building is used by the Hood County Historical and Genealogical Society whom have indexed, alphabetically by surname, a number of historic Hood County Records, both governmental and commercial. These indexes are offered at the Depot for private non-commercial use by genealogists to assist them in researching for relatives in Hood County, Texas. The Society meets the fourth Monday at 7 pm if you are interested in attending.

This year Preserve Granbury has donated $2,350 to the City towards repair of water damage in the bathrooms. 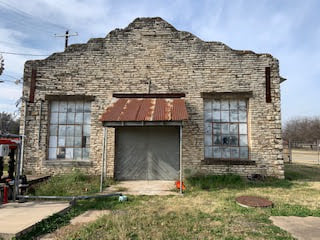 The Preserve Granbury group had the privilege of working on the historical Granbury Light Plant, located off Brazos St. The building was in need of interior concrete work, window preservation, a new roof, and fresh paint. All of these projects will help preserve this wonderful building! Check out the before and after photos attached. 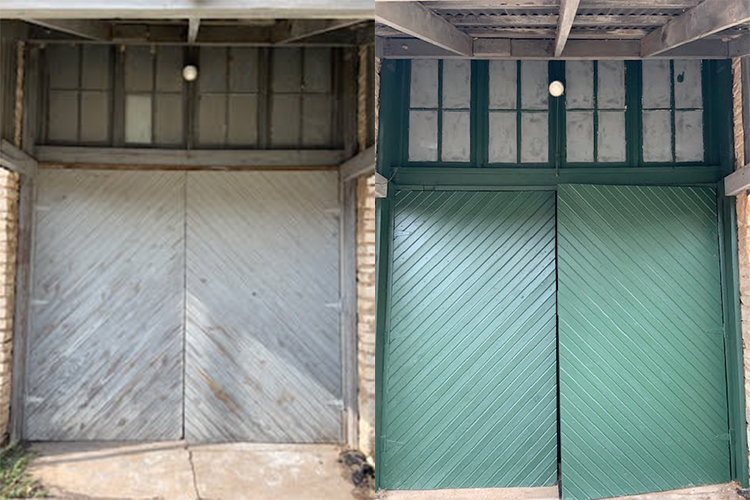 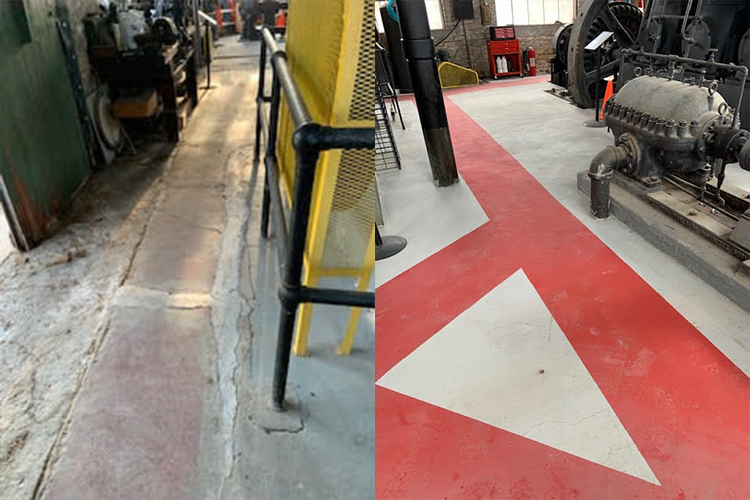 After the preservation of the light plant. The project included interior concrete work, window preservation, repainting, as well as a new roof.

This impressive red brick building was constructed in 1905 by John E. Brown for the Hood County State Bank. The wide round arches of the bank building’s entryway and windows and its pyramidal turret distinguish it as an example of the Victorian Richardsonian Romanesque architectural style.

After eight years, Hood County State Bank sold its building, which has housed business offices, including Porter title, since that time.  Currently owned by Scott and Vicky Young, it is Red (on the square) Boutique.

The Granbury Independent School District, formed in 1923, voted to build its first building, an elementary school, in 1935.  Before this building was completed, all grades were in one three story multi-room school in Granbury.  This building would serve the community as the only grade school until 1962.

Fort Worth architect C.M. Love developed the school’s design.   With its distinctive characteristics of Art Deco and Modern architectural styles, the school is a rare surviving example of the Modern Movement in a small North Central Texas town. 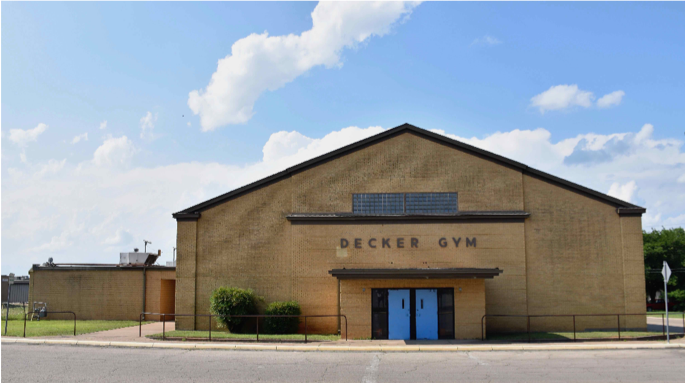 Built in 1949, by Granbury Independent School District, the gymnasium was considered state-of-the-art and represented the first indoor athletic gymnasium in Granbury. Equipped with a stage, the building also provided a large auditorium with the capacity for use as an entertainment center and social gathering place. Designed by Fort Worth architect Wyatt C. Hedrick in 1949, Decker Gym is an example of his work on a small scale for a rural North Central Texas community. 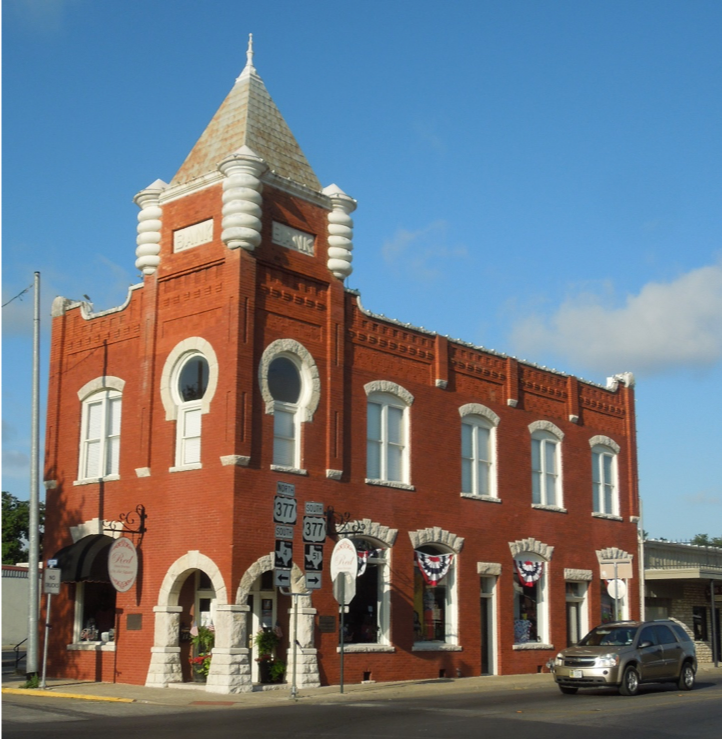 This impressive red brick building was constructed in 1905 by John E. Brown for the Hood County State Bank. The wide round arches of the bank building’s entryway and windows and its pyramidal turret distinguish it as an example of the Victorian Richardsonian Romanesque architectural style.

After eight years, Hood County State Bank sold its building, which has housed business offices, including Porter title, since that time.  Currently owned by Scott and Vicky Young, it is Red (on the square) Boutique. 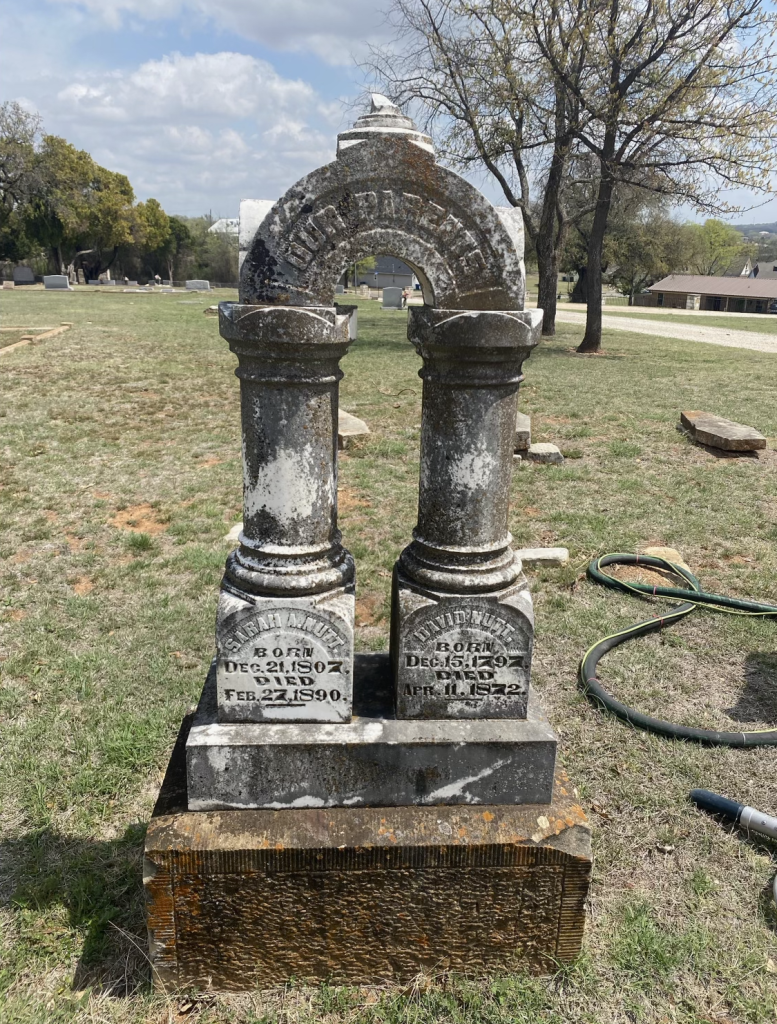 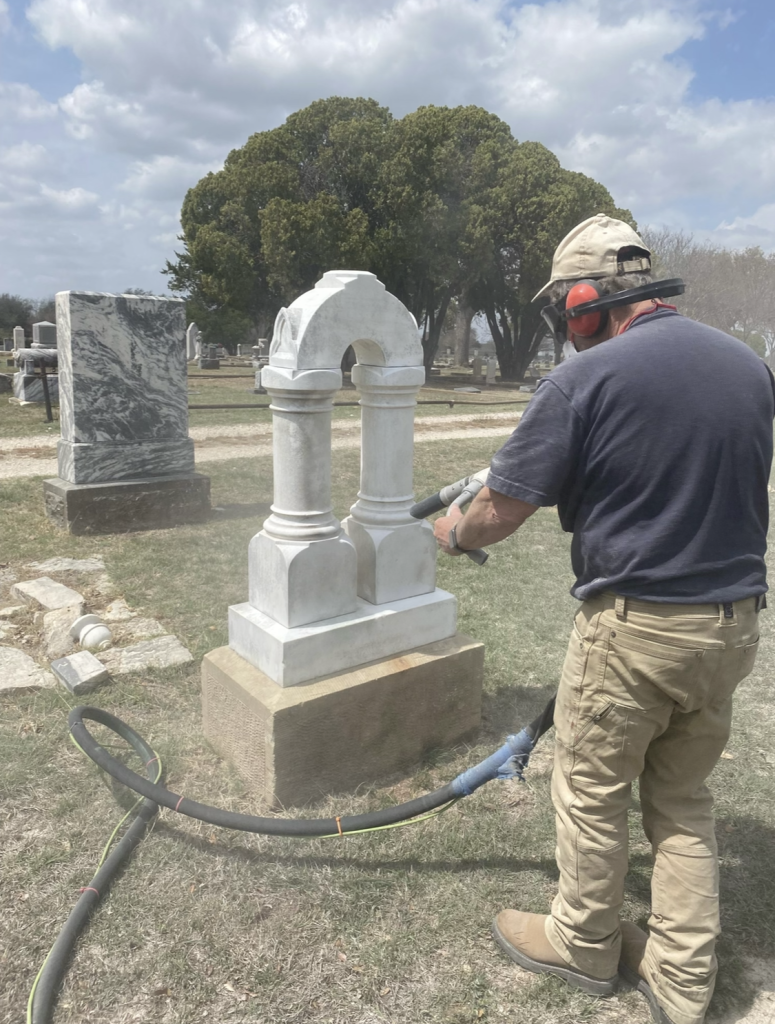 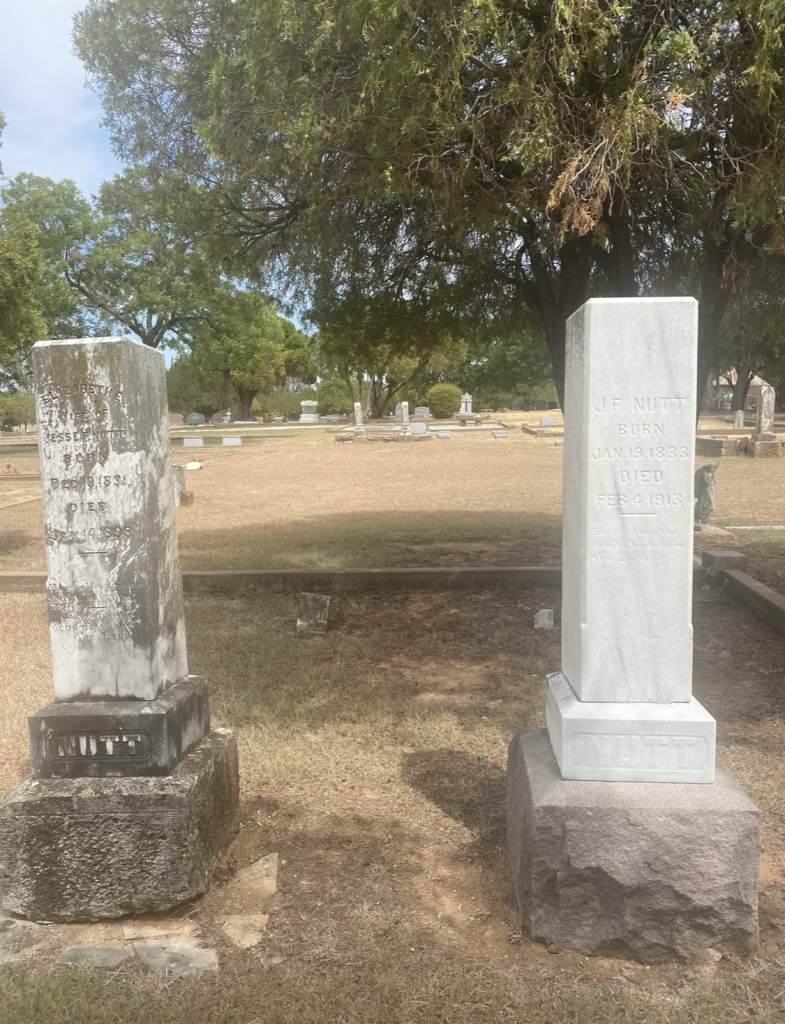