Learn How Native American History in Texas Evolved into Legends, Myths, and Movies

Home/Uncategorized/Learn How Native American History in Texas Evolved into Legends, Myths, and Movies

Learn How Native American History in Texas Evolved into Legends, Myths, and Movies

Preserve Granbury will present four seminars in November and December that will delve into Texas and Comanche history and examine how actual events became the stuff of legendary Texas folklore.

The first seminar is Saturday, Nov. 2, at 11 a.m. at the Hood County Library. It will feature Pulitzer-prize winning author Glenn Frankel discussing his new book, The Searchers: The Making of an American Legend. Frankel’s book compares the real life abduction of 9-year-old Cynthia Ann Parker by Comanches to the legendary story created by moviemakers in John Ford’s 1956 film, The Searchers. Frankel is director of the School of Journalism at the University of Texas at Austin. He worked 33 years for The Washington Post. During his career there, Frankel won the Pulitzer Prize for international reporting. A complimentary lunch and showing of the movie, The Searchers, will follow Frankel’s talk.

All of the upcoming seminars coincide with “Comanche Nation: The Story of Quanah and Cynthia Ann Parker,” an exhibit on display at the Langdon Center’s Gordon House from Oct. 26 through Dec. 18. The Gordon House is located at 308 East Bridge St. in Granbury and is open Mondays through Fridays from 9 a.m. to 5 p.m. and Saturdays 10 a.m. to 3 p.m. Admission to the exhibit and seminars is free. Preserve Granbury, the City of Granbury, and Tarleton State University are partnering to present the exhibit and seminars. 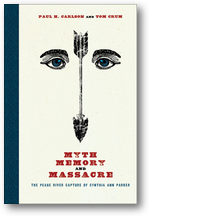 On Friday, Nov. 15, at 7 p.m. in the Gordon House at the Langdon Center, authors Tom Crum and Paul H. Carlson will review their book, Myth Memory and Massacre, The Pease River Capture of Cynthia Ann Parker. Published in 2010, Myth, Memory, and Massacre examines the true story of the Texas Ranger and U.S. Cavalry raid on a Comanche hunting camp in 1860, where Rangers captured 34-year-old Naudah, or Cynthia Ann Parker, and separated her from her Native American family. Crum lives in Hood County where he served as state district judge. He is a director for both the East and West Texas Historical Associations. Carlson is professor emeritus of history at Texas Tech University in Lubbock.

On Sunday, Nov. 17, at 2:30 p.m. in the Gordon House at the Langdon Center, historian Doug Harman will discuss the creation of the Quanah and Cynthia Ann Parker exhibit, the significance of the mesa known as Comanche Peak in Hood County, and contemporary issues facing Native Americans. Harman is director emeritus of the Texas Historical Commission’s Texas Lakes Trail and he worked on creating the Quanah and Cynthia Ann Parker exhibit now on display at the Langdon Center. Harman has served as both city manager and convention and visitors bureau director for the City of Fort Worth and he is a member of the Tarrant County Historical Commission.

The seminars will conclude Wednesday, Dec. 11, at 6 p.m. in the Gordon House at the Langdon Center with the showing of the documentary film, Reel Injun, On the Trail of the Hollywood Indian. Produced in 2009, Reel Injun examines Hollywood’s portrayal of Native Americans from the silent movie era to today.